Las Catalinas has partnered with Guanacaste Wildlife Monitoring to place several camera traps around different parts of the nature reserve at Las Catalinas. These camera traps are motion activated cameras that function in all light levels, which provide an animal-friendly way to track wildlife.

Each of these video clips are compiled, and then the animals in each clip are identified and documented, resulting in a survey of the types of wildlife found here as well as some insight into the health of the ecosystem via number of species and types of species.

The first round of tracking ran from July to September, and resulted in a total of 1753 clips throughout the duration of the three month tracking period. Guanacaste Wildlife Monitoring has compiled some of the best of these clips available to watch on Las Catalinas YouTube channel to offer a glimpse into the thriving ecosystem in Las Catalinas.

A Summary of the Data

These videos offers a window into the actual life going on each day in the reserve. For a larger overview, it’s helpful to look at some of the numbers. 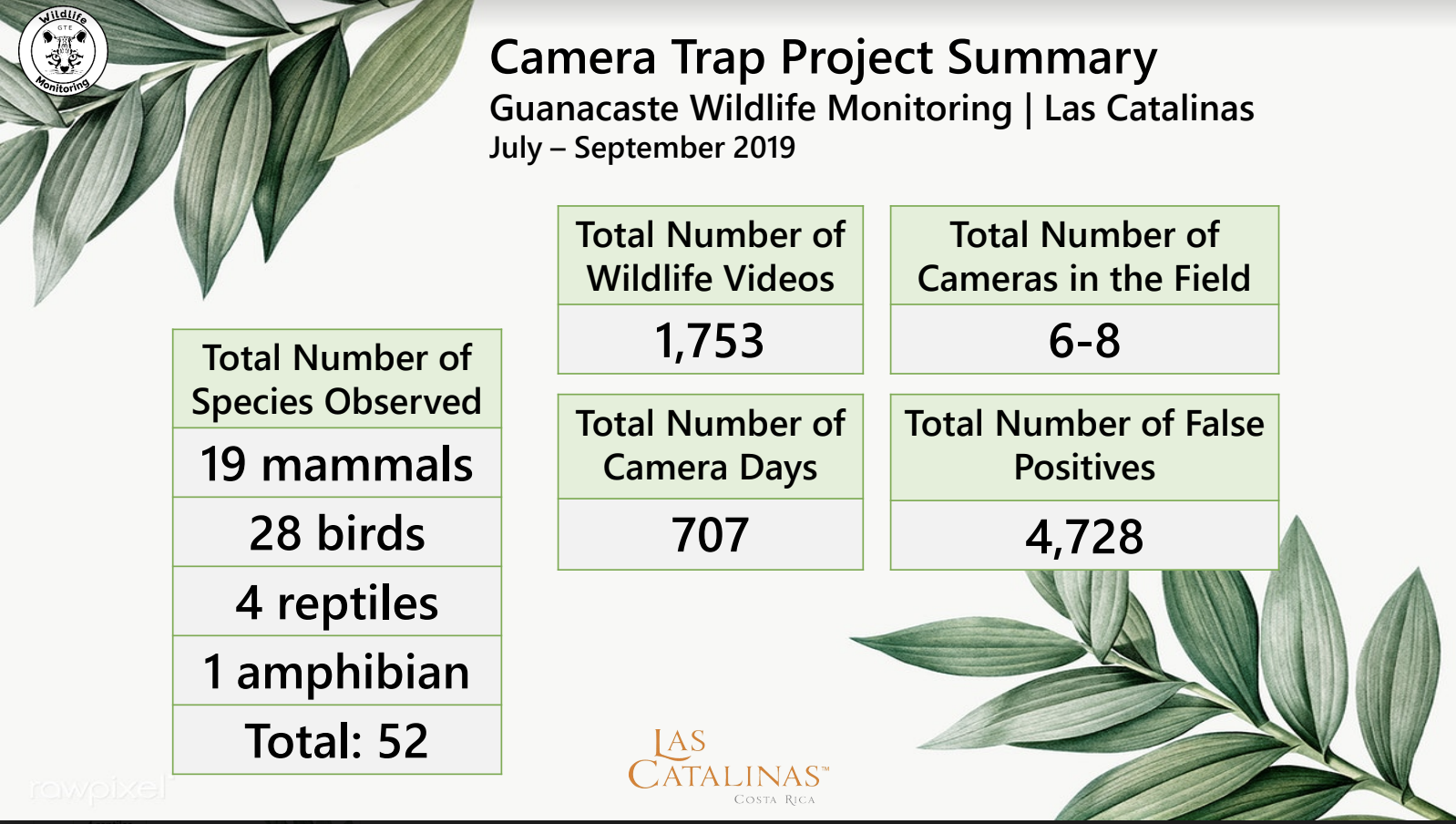 First, an overview of total sightings. 1753 wildlife videos from an active base of cameras that ranged from 6 to 8 depending on replacements for maintenance. Almost 5000 false positives, most likely due to the movement of plants in the wind, rainfall, or falling foliage.

Above, you can see the breakdown per-species, which details each of the 52 species found in Las Catalinas and the frequency in which they appear on the ground. Considering the limits of ground-based camera traps in capturing footage insect life as well as animals that primarily live in the trees, this biodiversity is a strong sign towards the continued rejuvenation of the forest.

The first phase of this project was aimed at providing a baseline look at the biodiversity and health of the nature reserve at Las Catalinas, and provides a few key insights. First, the ecosystem is healthy enough to support niches for 52 different species (at least), a sign of plentiful food and a variety of habitats found throughout the reserve. Second, the forest is healthy enough to predators like pumas, ocelots, and foxes as well as large mammals like the white tailed deer and tayra, which means that each of the levels in the food chain beneath it are strong enough to support them.

Biomass (number of animals) and biodiversity are the two major factors upon which an ecosystem can be measured, and these signs are positive for the continued restoration of the tropical dry forest. Based on the baseline data provided by this first phase, next phases can target different areas within the forest in more depth, focus of the tracking more aerial or tree-based life, adjust to track certain keystone species, and more.

Perhaps the most important takeaway is that even as Las Catalinas continues to grow, the forest has grown stronger along with it. One of the visions for Las Catalinas was to show a model for how development could coexist with a healthy environment.

The trails around town are the best way to step out into nature and explore the reserve. With 42km of mountain biking trails and 5 hiking trails that range from coastal cliffs down into the heart of the forest, nature is just a step away no matter where you are in Las Catalinas.