The waters in the bay off of Las Catalinas feature expansive sandflats and volcanic rock formations, all at the intersection of shallow and open water. The result is a vibrant blend of different sea life, like the golden trevally, the spotted eagle ray, the balloonfish, and the cornetfish, in an area of the pacific coast known for some of the best snorkeling in Costa Rica.

Description: The golden trevally is a member of the mackerel family, and grows from little over an inch long as a juvenile (above) to more than a meter long and almost 15 kg. Golden trevally are most well known for their bright yellow colorations and dark black stripes when young. As the golden trevally matures, its scales shift to more dominantly silver colorations, with stripes remaining and gold receding to accents on gills, ridges, and fins.

Found Natively: The golden trevally is found throughout the tropical and subtropical waters of the Indian and Pacific Oceans, ranging from the east coast of Africa through Oceania to Central America.

Activity: Golden trevally are active throughout the day, and can be found primarily in shallow waters alongside reefs, although larger individuals often scavenge among sand flats and deeper water reefs.

Notable Behaviors: Juvenile golden trevally group up in large schools to follow a “pilot” fish, who serves as protection from other predators and often provides scraps of food that the golden trevally can consume. These pilot animals can include groupers, sharks, and even jellyfish, who the trevally avoid through their superior maneuverability.

Interesting Facts: Golden trevally will often utilize divers and snorkelers as their “pilot” animal, and it is not uncommon for one or more juveniles to group up and follow along right next to a diver’s mask or faceplate for the duration of a dive. 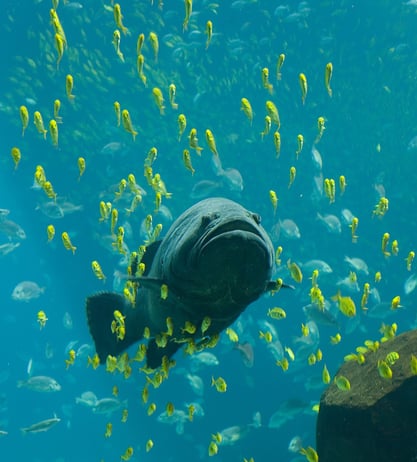 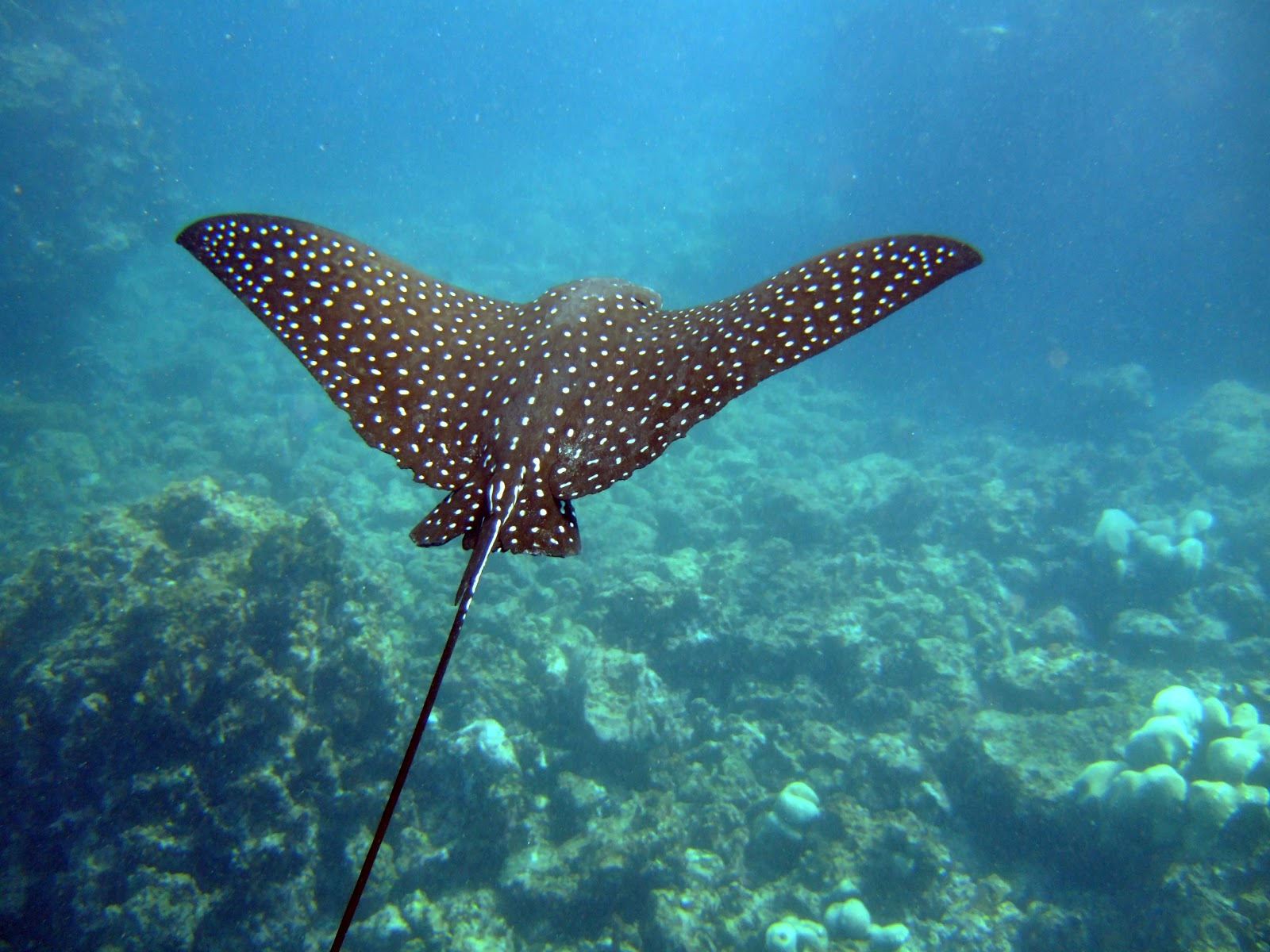 Description: Spotted eagle rays are notable among rays for their defined head (a characteristic of eagle rays), their long tail, and the bright white spots on their dark backs, a stark contrast to the all-white colorations of their bellies. Spotted eagle rays are typically three to four feet long from tip to tail, with a wingspan of about three feet, but in the right conditions these rays can grow much larger, up to 16 feet long and almost 10 feet from wingtip to wingtip.

Found Natively: Like the manta ray, the spotted eagle ray is circumglobal, found in tropical waters all around the world.

Activity: Spotted eagle rays typically range in shallower waters, and have been tracked to align their periods of activity with the tides, with research showing that these rays are often more active at high tide. They are less closely tied to the cycle of day and night.

Notable Behaviors: Spotted eagle rays are one of the only rays that will actively dig for food, and can often be found burrowing into sand flats looking for mollusks and crustaceans. They are also notable for their two types of leaps from the water. In the first, they will launch directly from the water up into the air, slapping down on the water (scientists estimate this is either to attract others or remove parasites). The second consists of a number of “skips” along the surface of the water at 45-degree launch angles, estimated to be an escape mechanism.

Interesting Facts: Spotted eagle rays are social creatures, and follow three main behaviors. They can travel in loose aggregations of up to sixteen individuals, which represents more casual social interactions. Rays can also travel in schools, which range up to six individuals swimming in the same direction at the same speed. Then, in unfamiliar waters or while foraging, rays will split off for themselves. 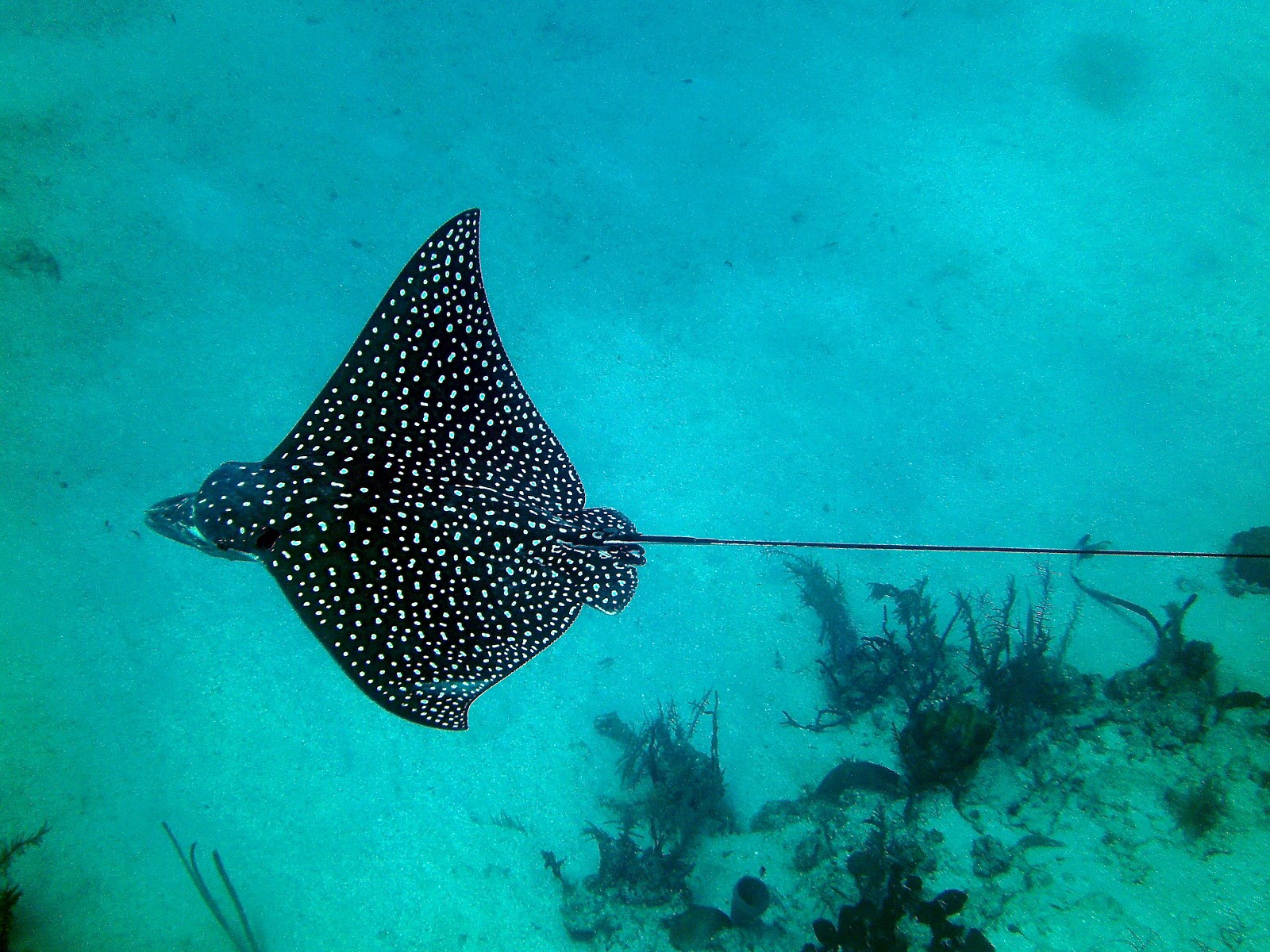 Spotted eagle rays are social creatures and often travel in groups of up to six individuals, sixteen individuals. However, while foraging, like in the waters off of Playa Danta, they're usually spotted alone | PC: Commons 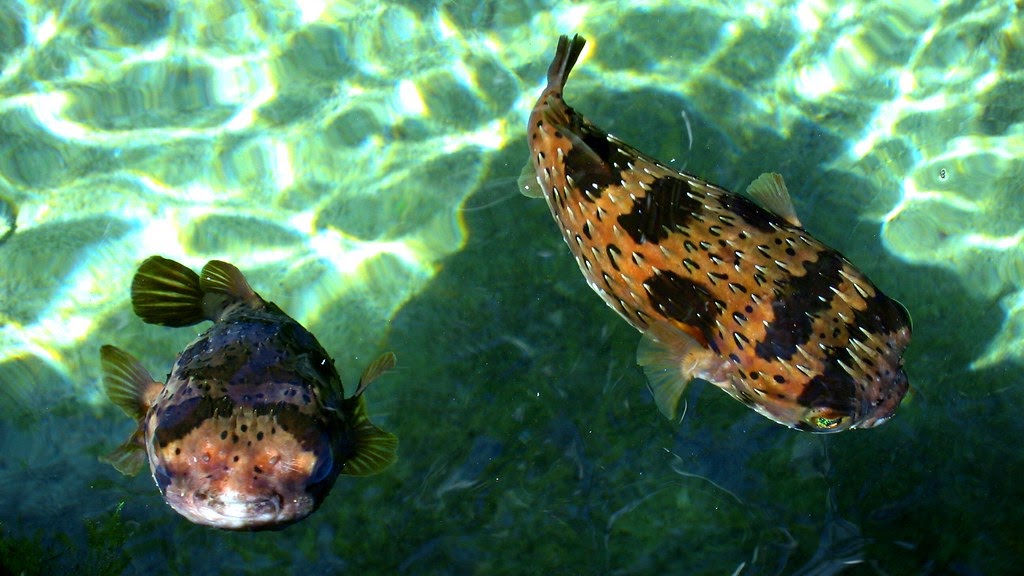 Description: Balloonfish have a distinct boxy body lined with small spines, as well as small fins, large eyes, and a predominantly brown hide, with darker vertical stripes and spots. Balloonfish typically grow between 12-14in, with individuals measured as large as 20in in some cases, and can weigh up to 5 pounds.

Found Natively: The balloonfish is circumtropical, found in all of the world’s tropical waters from Atlantic, Pacific, and Indian oceans, and has been shown to spread to subtropical waters where temperatures remain high for much of the year.

Activity: Balloonfish are typically found between 6-100 feet deep, and tend to cluster along structures and the seafloor. They can be spotted any time of day and night, and in the waters of Guanacaste are particularly active during night dives.

Notable Behaviors: Balloonfish are one variety of the pufferfish family, who can quickly inhale water to expand to up to three times their natural size when threatened by a predator, which presses the ballonfish’s spines out to make it inedible to a potential predator.

Interesting Facts: The inflation process is not instant, generally taking around 15 seconds for a pufferfish to expand to full expansion. This is a taxing process on the fish, and after a full expansion can take almost 5 hours for a fish to return to full activity. For this reason, some skilled predators will wait until a puffer has expanded, and then hunt these creatures as they contract. 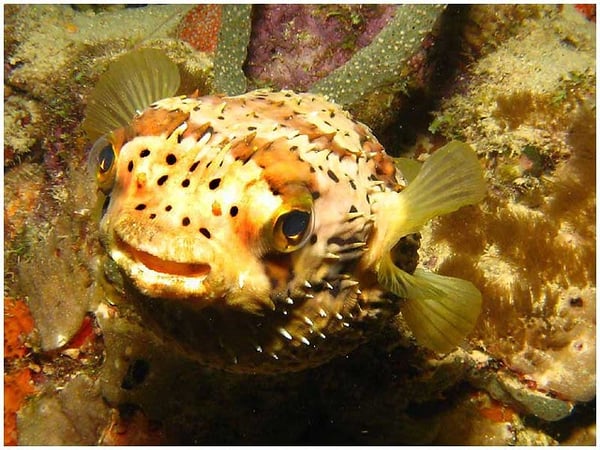 A balloonfish contracting after puffing up. During this time, balloonfish are very vulnerable to predators, and hide carefully | PC: Commons 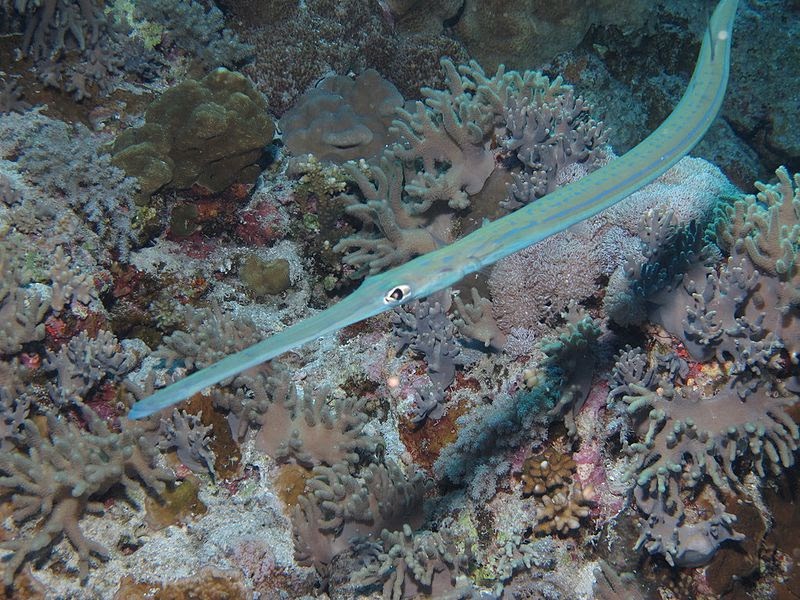 Description: Bluespotted cornetfish, along with other members of the flutemouth family, are immediately noticeable for their exceptionally long and slender body shape, with several small stabilizer fins along its body that it uses to glide through the water. Measured up to 5 feet long, the bluespotted cornetfish has a drab green and brown hide covered with a vibrant array of blue spots, and averages around 3 feet long, and up to 5kg.

Found Natively: The cornetfish ranges from the eastern shores of Africa to the western shores of the Americas, covering tropical and subtropical waters throughout the Indo-Pacific.

Activity: Bluespotted cornetfish are active throughout both day and night, and tend to inhabit shallow water reefs (between 10 and 60 feet deep) as they patrol the bottom searching for small squid, fish, and crustaceans that they quickly suck up through their large mouths.

Notable Behaviors: As larger, swift-moving fish, cornetfish have few natural predators, and are often unafraid of divers. In some cases, divers gathering underwater have noticed bluespotted cornetfish hovering right alongside them in the circle.

Interesting Facts: The bluespotted cornetfish’s hide actually changes color based on the available light level. During the day, the bright blue spots reflect light to camouflage the cornetfish with more vibrant blue waters, while in the evenings, cornetfish appear a drab green and brown to blend in with the dark bottom.

During the day, bluespotted cornetfish appear a vibrant blue, and change colors as the evening arrives to camouflage themselves in the darker colors | PC: Commons

Explore the Waters of Guanacaste

Each of these fish, along with hundreds of other reef and open water marine life, can be spotted in the waters around Guanacaste, including while at the snorkel spots around Las Catalinas or on a dive at the Catalinas Islands. To learn more about these snorkeling tours, dive spots, and other experiences and see which is right for you, reach out to the concierge team in Las Catalinas.