One of the cool things about the Guanacaste beach area where Las Catalinas is located is that there are so many wonderful places to visit within nearby striking distance.   Last week I got to do a road trip with two of my children, Bob Davey, and two of his children.   This is my report.

Our first destination was Monteverde, the famous high altitude cloud forest preserve area.   The drive there was spectacular.   From Las Catalinas a nice paved country roads take you through the Guanacaste and Nicoya countryside across the Tempisque River bridge to the Pan American Highway.   From there you leave the pavement behind and start heading up!   The shortest route would be via Juntas.   We went via Guacimal.   The scenery and views on this route are stunning.   To the east we could see the clouds clinging to the ridge tops.   To the west is an incredible panaroma of the Gulf of Nicoya and the mountains of the Nicoya Peninsula beyond. 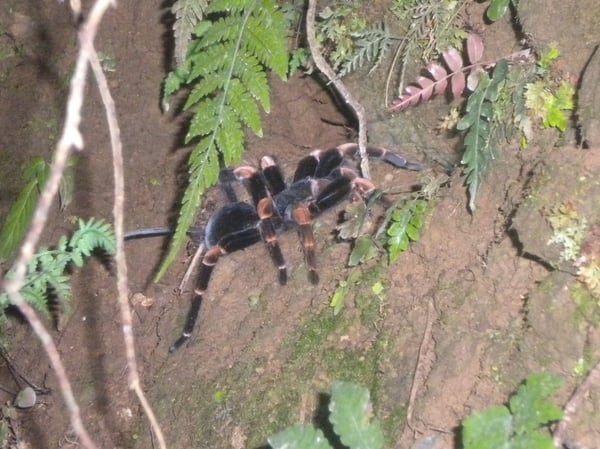 Up and up we went, and finally we made contact with the clouds.   If you have ever flown into Liberia you have probably seen the clouds clinging to the volcanoes to the east.   You might think, "Oh, that's just a few clouds around the high peaks."   Well, not this time!   The wind was howling, the temperature dropped, and the mist was blowing.   It was dramatic!   And for someone dressed like me, it was cold!   Which didn't stop me from doing a guided night hike with my son, at the Children's Enternal Rainforest.   There we saw, among other things, this enormous tarantula.   Our guide was great, by the way.   I learned a ton.   And I froze.

Our hotel, the   Fonda Vela was perfect for us.   Not super deluxe, but nice rooms and a nice experience.   Cool pool and jacuzzis too.

The next day we hiked to the nearby San Luis waterfall.   There several dramatic crossings on narrow planks over the raging stream.   Enough to make a daddy worry some, and to make quite an adventure for the children.   It was a great experience.   Afterwards we had the best milkshakes ever, made from on-site fresh dairy products at the Monteverde cheese factory, then hit the road again heading towards the Arenal Volcano.

The road from Santa Elena (next to Monteverde) to Tilaran was slow and bumpy.   But it would be great on a mountain bike (that is my next fantasy...).   Coming in to Tilaran we rejoined the pavement, then came around on the north side of the lake.   The weather stayed cool and misty, obscuring the volcano but making for a dramatic fog shrouded evening at the Tabacon Hot Springs.   This may be the most impressive natural hot springs in the world.   It is developed into a paid (not cheap!) attraction, which is not normally my cup of tea, but it is remarkably well done and beautiful.   Two hot rivers flow through lush gardens with innumerable pools and waterfalls.   After a long chilly day it was perfect.

The following morning brought the surprise highlight of the whole road trip to me.   I had heard raves about Rancho Margot, but didn't know quite what to expect.   This is an off the grid, nearly completely self sufficient operating farm and hotel that is absolutely at the end of the road.   "Where the middle of nowhere is somewhere special", they say.   It is utterly fantastic, one of those places that is clearly and completely a labor of love.   The buildings are done so tastefully, with completely local materials and techniques - simple, practical, and beautiful.   All the food is grown on the farm, and it is delicious and healthy.   We managed to catch part of the tour of the ranch, and it is pretty amazing.   The power is from a tiny hydro plant.   The hot water is produced by coils of pipe buried in the compost pile.   Etc., etc.   I could go on, but I can't do it justice.   You need to go.   Trust me on this one.

From there, it was time to head back to the beach.   We arrived just in time for sunset.   It was great to be back to the warmth and the sun and the ocean but equally great to have had such a fine adventure.