Not so long ago Las Catalinas was all pasture land.   The natural state of this land, however, is a tropical dry forest.   That is what we want it to become again - with the exception of the small portion of land where we are building our town.   So, we are actively and purposefully restoring a topical dry forest ecosystem at Las Catalinas, an effort which began in 2007.   The techniques for doing this were developed and proven by famed biologist Dan Janzen in the nearby Area de Conservacion Guanacaste.   There are three components of the program recommended by Dr. Janzen: prevent fires, plant native trees, and prohibit hunting.   We are eagerly doing all three, along with active wildlife management.

The tropical dry forest is a particularly rich and beautiful ecosystem.   Its biodiversity is nearly equal to that of tropical rain forests, and many of its species are not replicated in the rainforest.   The trees of the tropical dry forest are some of the most beautiful and spectacular in the world, and they put on a dazzling show of color throughout the dry season as different species put forth their differently colored flowers at different points in the season.   The fauna of the ecosystem include creatures like howler monkeys, pizotes (coatis), iguanas, and anteaters.   It is also one of the most threatened ecosystems in the world.   A few hundred years ago half of the land area in the new world tropics was tropical dry forest - an area greater than that of the original tropical rainforests.   Today less than one percent of that forest remains in its virgin state.

Like the vast majority of similar lands in Guanacaste, the land that is now Las Catalinas was long ago converted into pasture lands.   The primary species in these pastures is an extremely tough and aggressive one, an invasive African grass called jaragua.   Jaragua, of which we have plenty in Las Catalinas, grows in thick stands up to two meters tall.   When it burns, it burns very rapidly and hot enough to destroy all the above ground parts of small woody plants - thus preventing the re-establishment of a tropical dry forest.   The trees that are native to the tropical dry forest ecosystem did not evolve in an area with natural fires and therefore are not fire resistant.   In the absence of fire control, the species that can establish themselves in former pasture land are typically not the desirable native trees, but are more fire resistant "weeds" of various sorts. 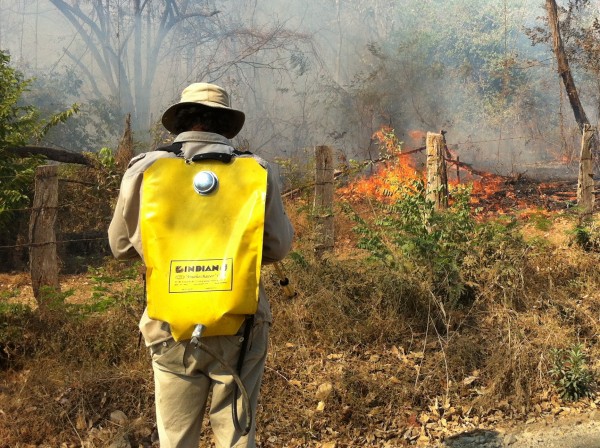 Fire control is by far the most important task in re-establishing a tropical dry forest.   Fire is not a natural part of the Guanacaste ecosystem.   All fires in the region are caused by man.   It is traditionally used as a pasture management tool.   In our immediate area many fires are set intentionally by hunters so that they can shoot animals who are fleeing the blaze.   Other fires are accidental, often resulting from sparks blowing from yard waste fires.   In the very dry conditions of March and April is does not take much to get a fire going. 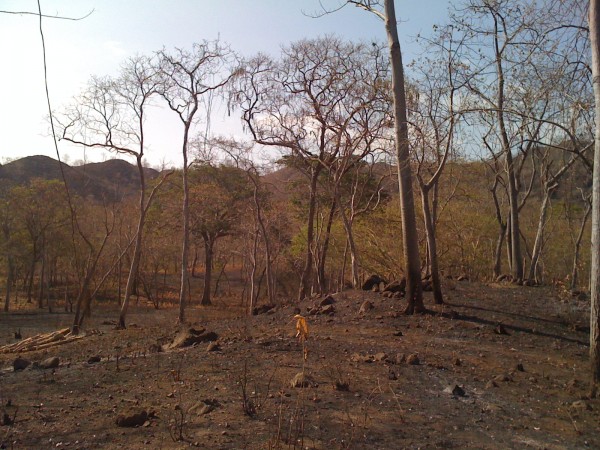 Prior to our purchase of Las Catalinas in 2006 substantial portions of Las Catalinas would burn every year.   Preventing these fires and fighting them when they do start is tough, dirty work.   Most landowners in our area make no attempt to prevent or fight fires. It is one of the primary duties of our Las Catalinas Agroforestales staff.   Our fire brigade maintains over 80 kilometers of fire breaks within Las Catalinas.   Since 2009 we have stopped at least 30 fires in the buffer areas at our borders.   We protect over 2,000 hectares of land within Las Catalinas and neighboring properties (Las Catalinas is about 470 hectares, or 1,200 acres).   We have also brought training to nearby local communities through the National Forest Fire Prevention and Control Commission (CONIFOR) of the Ministry of Environment (MINAE).

With proper fire control, a tropical dry forest will eventually regenerate if the seeds of the necessary tree species are located near enough to be carried to the land by winds or animals.   The process can be greatly accelerated and enriched by the planting of trees, however.   Since 2007 we have planted more than 5,000 trees of 13 native dry forest evergreen species such as Cocobolo (Rose wood),  Espavel, Higueron (Fig tree)Tempisque, Cenizaro, Aceituno, Ojoche, Guapinol (Stinkytoes), Zapote, Ceiba, Caoba (Mahogany), Almendro de Rio and Lorito. 85% of the trees have survived, which is a very high rate.  We water the young trees by hand to increase their survival rate.

The trees we have planted have been purchased in plant nurseries in Guanacaste, promoting local economy and guaranteeing we get trees well adapted to our conditions. The trees have been planted in ravines and watersheds to promote water conservation.

Hunting is prohibited at Las Catalinas and this is enforced by a combination of our forestry workers and our security staff.   This is not a big issue for us anymore, but it has not always been so easy! 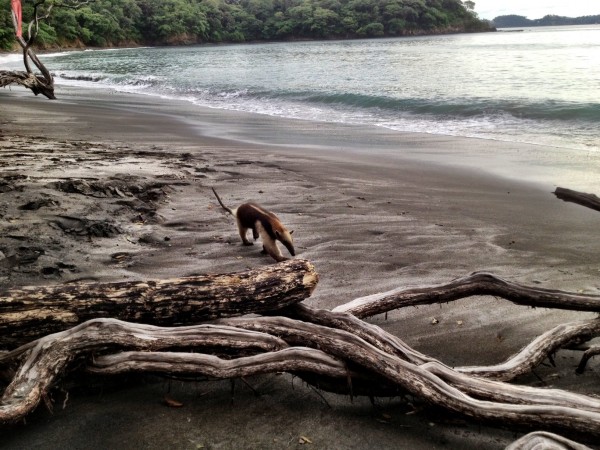 In addition to the great and obvious benefits for wildlife from fire prevention and reforestation, we are doing other things to help the animals thrive in this ecosystem.   We build and maintain stone watering holes in the ravines of Las Catalinas to provide year-round drinking water for animals.   We build "monkey bridges" in Las Catalinas and in neighboring areas to enable monkeys to cross roads and power lines safely.   On rare occasions where animals like raccoons become a nuisance, we relocate them to more remote areas of the property.

Results and the Future

We did have a big fire in 2009, before our fire fighting measures were fully in place.   Hopefully that will be our last one ever.   Since then fire damage at Las Catalinas has been minimal.   After just a few years without fire, the forest looks quite noticeably different.   The understory is not so much the instant tangle that tends to grow up right after a fire.   It is more purposeful, and "woodier" with less jaragua.   Deer are more prevalent.   We are regularly seeing anteaters and grey foxes, and occasionally ocelots.   These are species that were not visible just a few years ago.   Howler monkeys many days are coming right down to the beachfront area at Playa Danta - that didn't use to happen.

As the years and decades go by, I expect Las Catalinas to become one of the great examples in the world of a regenerated tropical dry forest.   It will also be one of the most visit-able and enjoyable, and will expose many thousands of people who would otherwise never get to see it to the wonders of the tropical dry forest ecosystem.

This will be an important part of our legacy, and one that I treasure.