(from Departures magazine, a subscription for American Express Platinum Card and Centurion Members. link at bottom) 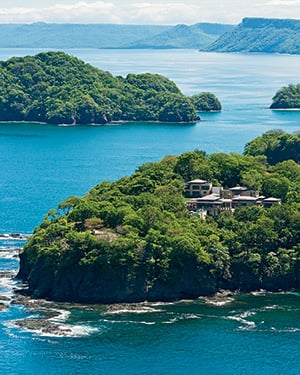 Six years after the 2008 financial crisis, Costa Rica and its most glamorous enclave, Peninsula Papagayo, enter prime-time once again.

The drive to Peninsula Papagayo, in Costa Rica's northwest Guanacaste province on the Pacific coast, takes 30 minutes from Liberia International Airport. It's the dry season, so the land is brown and dusty and untamed, but the sky couldn't be bluer. The 85-degree weather is humid but the perfect temperature for a T-shirt, shorts and a straw Panama hat. For all the buildup about Costa Rica being wildly overdeveloped, there's an abundance of cows and horses along the curvy blacktop road.

My driver reaches Peninsula Papagayo's security hut, and the gate opens. Suddenly the lawns turn a manicured green, giving way to a reflecting pool in which sits Costa Rican artist Jorge Jiménez Deredia's Genesis de Papagayo, a large white Carrara marble sculpture of what looks like a woman resting in child's pose. We slowly make our way down a five-mile, hand-laid brick road that snakes around the peninsula's 4,000 hilly acres, with 23 miles of jagged coastline and 31 sandy beaches. The area is home to four resorts, 59 houses and 400 of Costa Rica's 1,000-plus animal and bird species.

We pass white-faced monkeys cavorting in the tropical forest and a gigantic iguana meandering down the road. Nearby are both the decade-old Four Seasons Costa Rica at Peninsula Papagayo (rooms, from $450; Al Norte del Doit Centre Liberia; 800-322-3442; fourseasons.com), a sprawling resort of multiple brown cocoon-like structures that blend into land, and the 21 gorgeous private villas at Exclusive Resorts (villas, from $1,550 a night for up to eight people; 866-863-2688; exclusiveresorts.com), a high-end time-share membership operation owned by AOL founder Steve Case's Revolution venture capital fund.

Veering northwest to a private peninsula, through a dense outcropping of Coyol palm trees, I come upon my destination, the 30,000-square-foot Villa Manzu (from $15,000 a night for up to 14 people; 949-264-1509; villamanzu.com), a jaw-dropping new eight-room estate complete with every amenity ever imagined: two heated saltwater pools; a hidden beach; an outdoor spa with a steam room and sauna; a movie theater; a gym; a rec room with a pool table and bar; a 128-bottle wine cellar; a garage with a Range Rover, a Ford Expedition, a Jeep, two golf carts and innumerable toys like surf and stand-up paddle boards " not to mention a 22-person, hotel-grade staff of butlers, chefs, waiters, chauffeurs and adventure specialists who make your whims their command, whether it's fetching you a pipa (a coconut with a straw) or organizing a fireworks display.

I've come to Costa Rica to figure out why suddenly a handful of Ã¼ber-luxe vacation properties are popping up in Guanacaste after a development dry spell, and evidently I am at ground zero.

Which is how I find myself at Witch's Rock Canopy Tour (506/2696-7171; witchsrockcanopytour.com), a ten-minute drive away, entangled in a nylon harness, carabiners, heavy gloves and a helmet over my Villa Manzu hat (so I didn't have to wear a hairnet " the place thinks of everything). I had originally objected to zip-lining. It's the Costa Rican equivalent of an amusement-park ride, I say to Celiceo. No, no, he counters. Villa Manzu buys out the entire venue for its guests. No lines. No waiting. Celiceo would even throw in a local naturalist/guide, Felipe Artinano, for educational purposes. Be sure to look down, Artinano says as we zip down cable 7 (of 11). There's a pond with alligators below.

It turns out Villa Manzu's level of luxury and service is exactly what Costa Rica's government had always envisioned for Papagayo. Wedged between Nicaragua and Panama, Costa Rica is small, with a land area roughly equal to 60 percent of metropolitan Los Angeles. The terrain has mountain ranges running north to south, creating a rugged spine that divides the Pacific from the Caribbean, and makes for a huge diversity of habitats " rainforests, cloud forests, volcanoes, beaches " that have been ripe for tourism since the beginning of time. Or at least 1970, when the Honduras-based Central American Bank for Economic Integration decided to identify places in the region that would be good tourist destinations. An ensuing study pointed to Guanacaste's Gulf of Papagayo area. In 1982, the government passed a law enabling the development of the so-called Tourist Pole of the Gulf of Papagayo (GPTP), with the country's tourism board having final say in all decisions.

The plan was to divide Papagayo into north and south sections. Papagayo, in the north, was to be an enclave for wealthy eco-jet-setters. The south, referred to as the Bay area, was to be more family friendly, with a mix of boutique hotels and bigger chains. The tourism board never wanted Papagayo to be the next Cancun, though, so it imposed stringent building regulations: Only 30 percent of the land could be developed; the maximum building height was set at 50 feet, or about three to five stories; and building colors would have to blend in with the surrounding nature " paint is tested for reflectiveness, for example.

When the Four Seasons and its Arnold Palmer-designed golf course (greens fee, from $230) opened ten years ago, it brought, as predicted, a whole new level of glitz and grandeur to Costa Rica. Exclusive Resorts came next with what has evolved into one of the company's signature locations. (Of the group's 300 global properties, its Costa Rica outpost is the only one with a private members' clubhouse.) Guests staying in one of the four-bedroom villas, each with a private plunge pool, have access to concierges both pre-arrival (ask for Chris Cornelius) and on-site (ask for Ronald Sanchez), who can arrange anything from a cruise on a 44-foot yacht to spa treatments in your master suite to an in-villa cooking lesson with the property's executive chef, Nicolas Devenelle. At the time we decided to build, it was an emerging market, says Exclusive Resorts CEO Philippe Bourguignon. Peninsula Papagayo truly was a blank slate.

And that was just the start. The media boasted the peninsula would soon be home to nine luxury hotels, 1,000 residential lots, three golf courses, a 375-slip marina, a beach club with a spa, tennis courts, an archaeological museum and an equestrian school.

To Papagayo's south, Steve Case began developing Cacique, an $800 million, 650-acre gated community with 2,000 homes, an Exclusive Resorts property, One&Only villas, a Miraval spa, an Andre Agassi tennis center and a Tom Doak golf course, with environmental advice by Jacques Cousteau's grandson, Philippe Cousteau Jr. About an hour farther south, Mindspring Internet service provider founder Charles Brewer was building Las Catalinas (houses, from $550 a night for six people; 866-357-3872; bloglascatalinas.devdoubledigit.com), a car-free pedestrian town based on the New Urbanism design movement. People did have a gold-rush fear, Brewer says. All of the five-star hotel brands had something in the works.

Then came the Great Recession. Seventy percent of Costa Rica's economy relies on tourism. The crisis halted a lot of projects, says Henry Wong, GPTP executive director. We were gearing up to break ground, Case says, and then felt it best to put the project on hold. For the next several years, development was more or less at a standstill, other than the opening of the beach club (sans spa) in 2008 and the marina in 2009. But now the peninsula is waking up again. We're experiencing a breath of fresh air, Wong says of all the area's new investments.

With the debut of the Andaz, in December 2013, Costa Rica's tourism board says the first wave of the peninsula's development is complete. (Villa Manzu opened six months earlier.) A sexy property with a carefree attitude, the Andaz has four types of guest rooms (go for one of the Large Suites with an in-room plunge pool), three restaurants, pretty infinity pools, a spa with nine private treatment bungalows nestled in nature and two small secluded beaches. Since it's new, there are still some quirks (like how Bay View King Rooms have a dark, cave-like lighting scheme), and it was hard to get a feel for its overall ambiance because there weren't many other guests around when I was there two months in. But all foibles can be mitigated at Chao Pescao restaurant, where world-champion mixologist Clark Jimenez " he represented Costa Rica in the 2013 World Class Bartender of the Year competition " elevates vacation cocktails to new heights. (If you say, Hey, Clark, I want a Bloody Mary, he'll roast the tomatoes and muddle them in front of you.)

The second wave is coming, with rumors that Bulgari is building a resort next to the Andaz, and that across the way a Marriott is under construction. I have also noticed a collection of individual owners who have purchased private lots, Bourguignon says. (There are indeed more than 1,000 residential lots for sale.) Over in the south Bay area, the hotel El Mangroove (rooms, from $320; Papagayo Bay; 506/2291-7750; elmangroove.net) just opened, and a Wyndham and another Marriott are in the works. The tourism board is considering adding a couple of restaurants in the Bay area and a water taxi to connect Marina Papagayo to the popular Guanacaste beach town Playa del Coco.

Meanwhile, sitting on Villa Manzu's veranda as the sun starts setting, I can just barely make out the two small beaches across the Pacific on the peninsula where Case's Cacique is going to be built. The project is back on, though he scratched his original concept. The cornerstone of our new plan is keeping 85 percent of the peninsula green and undeveloped. We shrunk the building footprint and decided to only build 300 homes, anchored by a high-end boutique hotel, Case says. In some ways the financial crisis was a good thing for Guanacaste, as it slowed everything and enabled the region to develop in a more methodical and authentic way. Farther south, Brewer keeps plugging along at Las Catalinas. He stresses that even with all the buzz, Guanacaste is not overdeveloped. If you go north from Las Catalinas, it's miles before the next anything. Eight or ten miles of empty coastline, Brewer says. The hype is exaggerated.

As day fades into the still, black night, a million stars begin twinkling so bright that they are reflected in the three-sided infinity pool. It's at this moment, here at this big house on this little patch of land jutting out into the sea, I truly understand why everyone from Patrick Callahan to Steve Case to Charles Brewer to Henry Wong has bet on Guanacaste: Because Mother Nature is the greatest luxury of all.

Read  more  in Departures, the exclusive magazine for American Express Platinum Card Holders and Centurion Members. (you need to be a member to access other Departures articles)