The rainy season ended on Monday. It rained for several hours that day, ending around 4:30 pm Costa Rica time (which is 6:30 Las Catalinas Time, but I'm not getting into that). Tuesday was sort of a transition day, Wednesday the easterly Papagayo Wind began to blow gently, and by Thursday it was really feeling like the dry season with clear skies and dropping humidity.  This is way late, about a month late. No one in Guanacaste can remember it ever raining in December like it did this year. This has been a good thing, because aquifers in the region were very much in need of recharging after three years of abnormally low rainfall.  It has also been very pleasant and gentle.  But it is also good that the rain has now ended.

Seasons are a fun part of life in Las Catalinas.  The wet and dry seasons (Green and Gold in marketing speak) are very different from each other and both wonderful in their own ways.  I'm very glad we have them both.  In a nutshell, dry season means no rain, lots of sun, higher temperatures, low humidity, consistent winds from the east, and your bathing suit dries out in about five minutes.  Green season means clear mornings, clouds in the afternoon, maybe some rain, cooler temperatures, high humidity, less sunscreen, and great sunsets.  More details are available in this post from 2011.  The chart below shows climate data for Liberia, which is reasonably close to what we have in Las Catalinas. 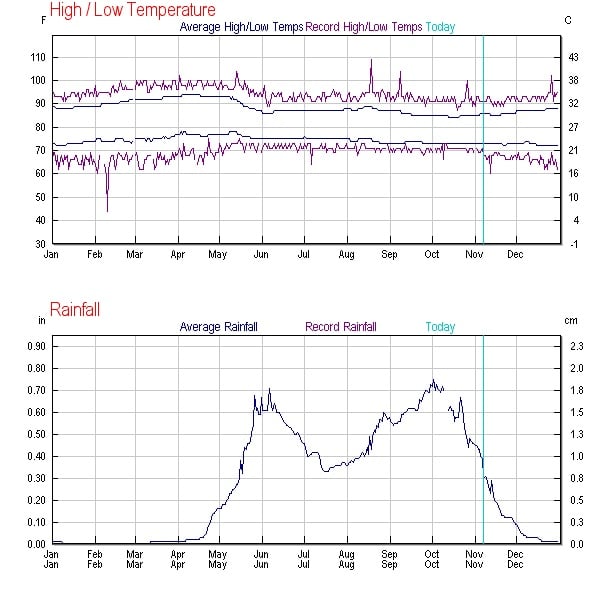