The Beauty of Summers in Las Catalinas, and Why You Should Go South


When people think of summer vacations, they rarely think of going south. After all, in most parts of the Northern Hemisphere, things get warmer as you go further south, and to most people the summer tends to be warm enough already.

But interestingly enough, our usual assumption that further south = hotter actually isn’t true, especially when you consider Central America. Take for example, Houston, TX. Average temperature during the summer? Well into the 90s, tipping over a hundred frequently. Logic follows that hundreds and hundreds of miles south in Costa Rica the world would essentially be on fire, right?

So why is the weather gentle, with a light sea breeze, lush green scenery, and a high of about 84 degrees for June, July, and August?

Read on to find out why Las Catalinas is a great place to go during the summer months, and why you might need to turn the plane around and head south for your next vacation.

Picture the scene. It’s the heart of July, the middle of the summer, and you’re in the heart of the tropics, only a few degrees north of the equator. You’d imagine blazing hot temperatures stacked on top of humidity wrapped in mosquitos, but the reality is much, much gentler.

Interestingly enough, Costa Rica experiences a different form of seasonality than more northern climates, with only two seasons -- wet and dry -- that take up the year. There’s a lot of science to explain exactly why this happens, but the effects are clear -- gentler seasons, more moderate temperatures, and a few months of the year where the weather is bordering on idyllic for months at a time.

One such time of year is the heart of the "winter", from late November to mid February, while the other ranges through the northern summer months, from the beginning of June to the latter part of August. Each has their own character, and we’ve talked about winter before, but we’ll focus on summer for now.

In Las Catalinas, located in the Northwestern province of Guanacaste, the weather follows a familiar and consistent pattern. After the prominent rains of May bring the foliage back to life, the middle months of June to August bring with them a steady rhythm of life. After cooler nights in the 70s, mornings are clear and sunny, with temperatures in the high 70s and low 80s. Throughout the morning the temperatures may rise, only in certain cases reaching the mid 80s, before the onshore breezes from the Pacific, or refreshing showers in the midafternoon bring the temperatures back to the low 80s for sunset.

And that’s about it. For three months.

An Easygoing Way Of Life

A typical day starts early, to get out on the biking trails in the morning mists and race along the newly packed soil on smooth dirt tracks through a forest bursting with life. The sunrises from the peaks are astounding, lighting the still-fresh world up in the occasional rainbow as the morning breeze clears the day.

Down in town, a cup of Costa Rican coffee paves the way to the occasional extra morning fitness on the beach or a simple morning along the beach watching the howlers and the occasional anteater make their way through the trees along the shoreline.

An excursion out into the crystal clear bay on a paddleboard punctuates the midmorning, with a refreshing plunge among the rock reefs with mask and snorkel to explore the world of colorful creatures beneath the surface. As lunchtime approaches it’s usually time for a trip back to shore, but not before a bit of play in the perfectly formed bodysurfing waves just offshore.

A light lunch under the trees gives way to the occasional afternoon shower, strong and brief as the rain pours down to refresh land, easily enjoyed with a good book from a covered porch. Around mid afternoon the rains have faded again, perfect for a foray out along the streets of town and onto the hiking trails, where rains have brought the life of the tropical forests to the forefront, boldly venturing out among the trees and the bushes to see and be seen.

The clouds are fluffy and white around sunset, leaving behind a painted expanse of whites and golds and pinks and purples and reds across the sky. As the evening winds down, the cool breeze of the ocean gently sweeps through town, underneath a crystal clear sky dotted with countless stars.

Maybe the next day the surf has come around, and the swell will be cresting perfectly down at Playa Grande for a sunrise break. Or maybe the visibility and the water temperature are both near perfection out at the Catalinas Islands for a dive down along the reefs. Maybe the afternoon sun will hit Santarena’s deck just right for a cocktail on the rooftop terrace, or maybe the low tide will coincide perfectly with sunset and dinnertime for a barrio barbecue out on Playa Danta. Maybe the supermoon will be bright enough for a cruise along the back side of the mountain long after the sun has gone down, or maybe a meteor shower will light up the skies above town in the late, late evening.

The little ins and outs of each day bring with them a welcome variance to the otherwise blissful conditions, spiced up over the course of the day with fascinating hobbies and projects to work on, out on and under the waves, in and around town, among the trails and the tropical forest.

Sure sounds better than crossing your fingers that the A/C doesn’t go out, right? 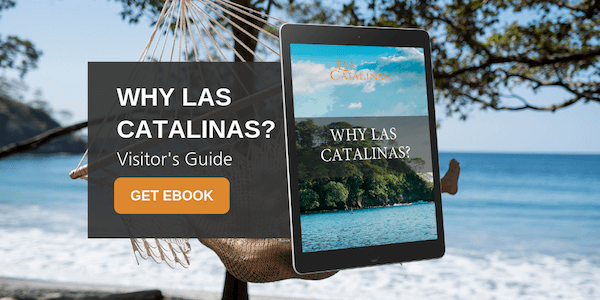 The waters in the bay off of Las Catalinas feature expansive sandflats and volcanic rock formations, all at the intersection of shallow and open water. The result is a vibrant blend of different ...